Ed Collins is a true Renaissance man with a great sense of humor. His many passions in life include coaching, writing, music, travel, the Spanish language and tennis, and not necessarily in that order.  He has used his unique talents to write and self-publish his recent book entitled, “Give It Your Miserable Best,” and all proceeds will benefit his non-profit organization to help under-served San Diego children through the Collins Youth Tennis Foundation. The book is a collection of his life experiences through 50 short and “shorter” stories.  Its focus is his personal observations about life regarding teaching, marriage, sandwiches, serendipity, travel, coming of age, aging, the San Diego Padres, and confronting one’s musical shortcomings in public.

A native San Diegan, Collins was introduced to tennis at age 10 when a neighbor gave him a racket and tennis tips. They were not official lessons but it was enough court time to ignite his lifelong passion for the sport. He became the Monte Vista High boys’ tennis coach, and later for 18 years, the men’s tennis coach at University of San Diego. In the 1970’s, he created the Ed Collins Tennis College to educate tennis teachers. It was the first of its kind in that era. 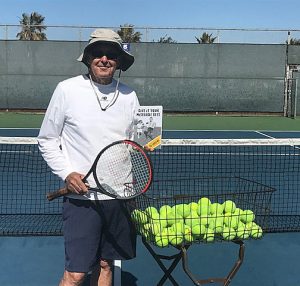 Collins’ tennis credentials are extraordinary. An award-winning USPTA Elite pro, he has been the Director of the Ed Collins Tennis Academy for 25 years at Peninsula Tennis Club in San Diego.  He received the USPTA Coach of the Year Award for the San Diego Division four times and the San Diego USPTA Lifetime Achievement Award in 2014. Recently, Collins earned national honors with the USPTA Community Service Award for 2020 acknowledging 48 years of service to his community.

Tennis is not his only interest as he had accordion lessons as a child. That instrument was wildly popular thanks to iconic band leader and accordionist Lawrence Welk, who hosted a popular American television program from 1951 to 1982. Welk’s style of “champagne music” inspired Collins.

“Someone knocked on our door advertising accordion lessons so I did that for a short period of time,” Collins said. “I was not good, and I’d rather be outside. I rebelled and quit. I started up again as an adult in my mid-30s.”

With his wry wit, Collins said his second accordion teacher was more interested in talking about the theory of music rather than giving actual instruction.

“I don’t think he particularly wanted to hear me play,” Collins said. “He would lean back in his chair and say, ‘Give me your miserable best.’ I never forgot that scene.”

Through the years, Collins used his musical skills to entertain kids at his summer tennis camps. He started a tradition of hosting a talent show with each session and Coach Ed played the accordion for his young athletes’ enjoyment. He currently practices every day and jams with a friend, a base guitarist, who is a professional musician.

“Tennis is my specialty and I’m not a great musician but I enjoy it,” Collins said. “As you get older your tennis skills diminish but musically I’m better than ever. We record music together and we might make a CD in the future.  Each song takes weeks to record, and if I make a mistake, he deletes it and we start again. There’s no editing involved. I get nervous and don’t want to make a mistake just like in tennis. You can see it or hear it and the results speak for themselves.  It tells you very precisely what you need to improve. You can’t lie about it and you just have to face it.”

As a Renaissance man, Collins highly values education. He has an undergraduate degree from San Diego State University in Physical Education with a minor in Spanish.  That academic prowess turned into a teaching credential and his linguist skills paved the pathway to a world of travel. He favors Spanish speaking countries and also tutors friends in the language for fun.

All of these talents found their way into Collins’ literary musings. Since 1995, he has been taking notes on life’s interesting and engaging moments. He has written over 100 short stories.

“I was encouraged to put them all into a book but never had the time to edit them for publication,” Collins said. “When COVID-19 hit, I realized it was the perfect time.”

The proceeds of the book will benefit his charitable organization that he created in 1990. Collins won the ITA/Wilson Region 8 Coach of the Year Award and it came with a $1,000 gift. He used it to seed a foundation initially named after his father called the Julius Collins Tennis Scholarship Fund in association with Youth Tennis San Diego. He later branched off to start his own non-profit and renamed it the Collins Youth Tennis Foundation.

Over the years, Collins has given thousands of scholarships to kids and organizations for tennis lessons, clinics and camps.  Past recipients included Mountain View Sports and Racquet Club, Caesar Chavez Service Club, community service organizations and music-related groups for children. One of his future goals is to provide chess sets to elementary school teachers, who want to teach their students the game.

“I want to support things that give kids confidence beyond academics,” Collins said. “There are a lot of brilliant people who didn’t do well in school but became successful through sports and the arts. When COVID-19 passes we’re going to ramp up and make that happen.”

Collins plans to continue to be a humble Renaissance connoisseur of sports, music, writing and art. He follows his muse along with a passion to inspire, educate and provide opportunities to children in under-served communities.

“There is a relationship between learning music and everything else like tennis and Spanish,” he said. “It takes the ability to put yourself out there and disregard what anyone else thinks. That’s why you give it your miserable best.”