The two clay courts at Barnes Tennis Center had once been a shining jewel of San Diego.  They were previously built as practice courts for the USA vs. Great Britain first round Davis Cup meeting in 2014. The Barnes clay courts were made from the same imported Italian red clay that was used to create a temporary stadium court in the right field at Petco Park. Then over time, Barnes’ courts gradually deteriorated and became unsafe for play. This year, however, the SCTA Foundation awarded Barnes Tennis Center a community grant to help renovate the clay courts and restore them to their previous glory. 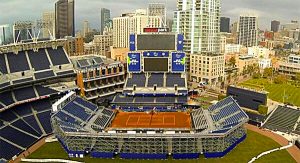 “Having the clay courts available to juniors is the key to their total development,” said Linda Milan, the Executive Director of the SCTA Foundation. “They will have the opportunity to train on a surface that is not readily available to So Cal players. It will provide a stepping stone to success at the national, collegiate and professional levels.”

Ryan Redondo, the CEO and General Manager of Barnes Tennis Center, was hired in May 2020 and it was his mission to help revitalize the entire facility, including the two clay courts. He described them as being in disarray.

“The watering system was not operable and the clay was in poor condition,” said Redondo, the former Head Men’s Tennis Coach at the University of the Pacific. “The courts were dangerous to the point that I took them offline so that no one could potentially hurt themselves.”

The solution was a system called CaliClay, which does not require an underground watering system. They also installed new lines, LED lights and each court has 16 tons of clay that plays like a true European or South American slow red clay court. Adults use them in the mornings and juniors play in the afternoons with Coach Jake Rother. 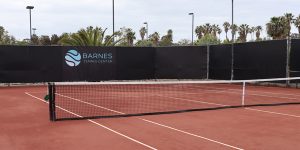 “The kids are learning to slide and play points,” Redondo said. “They are also learning to sweep and maintain the courts as a holistic approach. It sounds simple but it’s really important that they know how to take care of the courts.”

Others making use of the clay courts include high performance and college players. Recently many So Cal standouts prepared for the 2021 ITA Women’s All American Championships in South Carolina and the Junior Orange Bowl Tournament in Florida. They trained at Barnes because this facility has the only public clay courts in Southern California.

“The clay courts have been a tremendous re-addition to Barnes Tennis Center,” Redondo said.  “We are very grateful. Thank you SCTA Foundation for your support.”