Tory Bailey Jr’s path to tennis success has been filled with big dreams, family guidance and community support. He picked up a racket at age 3, and now over a decade later the high school senior is headed to Howard University to study computer science and play college tennis. His is a story of true commitment fueled by help from a loving tennis village.

As a toddler, Bailey went with his grandmother, Beverly Dawson, to Rancho Cienega Tennis Club, where he was introduced to the sport that would change his life. For years he had fun hitting balls with Dawson and in recreational youth classes. However by age 6, it was clear Bailey had talent.

“Tory was in group lessons and I could see he had a passion for tennis and he had skills,” Dawson said. “He was eager to learn and determined to succeed. I knew then I would help him in any way possible.” 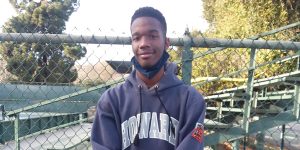 At Rancho Park, Bailey worked with Coach LeGeorge Mauldin on the early fundamentals and was later introduced to Coach Marty Woods from the Pete Brown Junior Tennis Program, a National Junior Tennis & Learning site (NJTL) at Harvard Park Tennis Center in Los Angeles. He started playing tournaments at age 10 and this was the start of his rapid rise in the sport.

Bailey is known for his attacking ground strokes and powerful serve. Now the 17 year-old is 6-foot 4-inches tall with the height to make an impact. He also trains hard on footwork and fitness to prepare for match play.

“Tory has an incredible weapon in his forehand and he can finish it from anywhere on the court,” said Woods, who was taught by legendary Coach Pete Brown, the program’s namesake. “Tory hates to lose and will fight until the last point, that’s why he has the heart of a champion.”

Bailey attends Connections Academy, an online public school high school, which allows time to train. He has participated in the USTA’s Junior Team Tennis leagues for many years, which taught him to be a team player. He also competed in American Tennis Association (ATA) tournaments and is on the ATA Junior Leadership Council.

In recent years, Bailey was the recipient of a USTA Foundation NJTL Grant and the SCTA Foundation’s Jack Kramer Future Champions Grant for his effort, dedication and success. 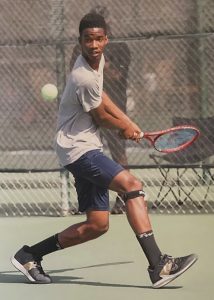 “The tennis courts have become my second home,” wrote Bailey, in his award winning essay.  “The moral codes of honesty, kindness, and helpfulness, guides my daily experiences. I am re-enforced with standards of these moral codes honesty, kindness, and helpfulness to others through tennis… I want to be dependable like the people, who influence me on the tennis court.”

Bailey experienced dedication first-hand from Dawson, who drove him to lessons, tournaments and events since he picked up the sport. She has also helped him through challenges.

“My grandma never gave up on me even when times were tough,” Bailey said. “She kept pushing me to be my best and work for my goals. I wouldn’t be what I am today without her.”

Said Dawson: “Tory is very quiet but you could see his emotions in his body language. If he lost momentum, you would see everything change. Now he recognizes not to give his opponent the advantage of knowing what is going on inside his head. He can control his emotions very well. It’s all about maturity and you never know when that will happen.”

Bailey’s academic dream is to study computer science at Howard University. Last year, he contacted the college’s tennis coach and expressed interest in the school. He was accepted and offered a place on the team.

“Tory has been working his whole life toward college to have good grades and a high level tennis game,” said Coach Marty Woods. “I think they liked his stats, drive and energy. He will be a productive asset to the team.” 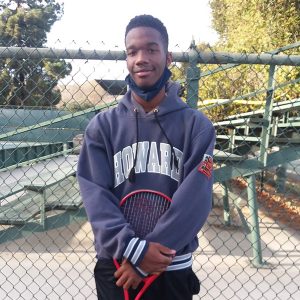 Bailey credits the sport of tennis and community support for his personal growth on and off the court.

“Tennis has given me many different opportunities and experiences in my life,” Bailey said. “I’ve traveled, learned and overcome adversity. Now when I face challenges, I take a deep breath and just try to focus and play my game.”