Frances Simpson Lang: A Game Changer On and Off the Court

Frances Simpson Lang: A Game Changer On and Off the Court

When Frances Simpson Lang sees a need in her community, she steps up and creates solutions.  As such, the Executive Director at Mountain View Sports & Racquet Club h as been a game changer and has helped tennis blossom in Southern California.

Simpson Lang was born in Salisbury, North Carolina, and has succeeded in many different careers. She owned a day spa in Dallas, Texas, and was a licensed esthetician.  She then enjoyed a 17-year career as a flight attendant for Delta Airlines. She was also an event planner for a pharmaceutical company, where she organized conventions and conferences for up to 500 people.

While at a Delta Airlines training in Dallas, she met her future husband, Harvey Lang. At the time he was a Deputy Sheriff in San Diego and a long time member at Mountain View Sports & Racquet Club. The pair married in 1999 and she picked up a racket in her mid 40’s.

A 3.0 level beginner at the time, Simpson Lang wanted more opportunities to play tournaments and leagues for entry level and intermediate players. She also wanted to play in the evenings but Mountain View lacked lights.  With these goals in mind, Simpson Lang got involved in the club and organized fundraisers.

“The club had been there for about 50 years and there wasn’t anything going on,” she said. “I wanted to have lights for night play, leagues for all levels and club events. There was also a small National Junior Tennis & Learning (NJTL) that could really help kids if we grew it. There was so much we could do.” 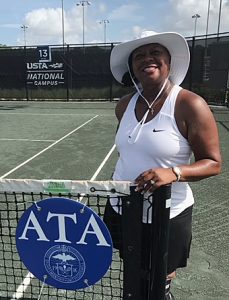 Additional factors that drove her passion to grow the game included a lack of representation for African American players at the Mountain View club and in tennis overall. She voiced her opinions and was invited to become the executive director and eventually club president. That was the beginning of positive growth and change.

At the time, the iconic San Diego tennis leader, Virginia Glass, had been running the Martin Luther King tournament at Mountain View. Glass was stepping down as the director and the head position was handed to Simpson Lang due to her passion for expanding diversity.

Though she had minimal experience in the tennis world, Simpson Lang was a successful event organizer. She quickly learned the ropes from other tournament directors, and now 20 years later, Mountain View has a robust plate of offerings. Additionally, she was responsible for reorganizing the NJTL program with help from a grant through the USTA Foundation.

“There is not enough tennis going on in the black communities,” Simpson Lang said. “We need kids to know that there are a lot of black people playing tennis. It’s all about accessibility.”

If asked, Simpson Lang says she’s an active 3.5 player, who enjoys creating events that bring the tennis community together. She has partnered with the American Tennis Association (ATA) to coordinate club member participation. She has personally captained two teams that went to the USTA Adult League Sectionals in mixed doubles and organized five others at various levels. 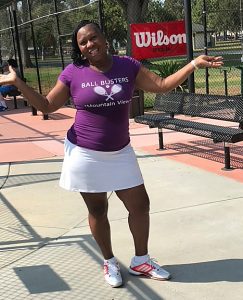 Today Mountain View Sports & Racquet Club is a thriving organization.  Post COVID-19, the club is busier than ever. Simpson Lang oversees the following:

With the growing success at Mountain View, Simpson Lang has an additional dilemma.

“We are running out of court space and time to play,” Simpson Lang said. “We’ve had a lot of new people coming into the sport and that’s a great thing. The challenge is how to fit everyone in.”

A lack of court time and space won’t stop Simpson Lang. Her gift is taking challenges and finding solutions.

“I am driven by the lack of tennis opportunities for low to mid-income people,” she said. “Tennis is not widespread enough and I want to change that. In my community it is huge for a child or an adult to learn tennis. I’m hoping they look at me and want to try it. The main thing is giving people the opportunity to play.”