Sportsmanship makes tennis fun because it builds friendship, skills and confidence on and off the court. Recently the SCTA Foundation partnered with Yonex USA in a program to honor 10 junior players in Southern California. As such, the SCTA Foundation asked So Cal juniors, “What is sportsmanship to you?” There were over 100 responses from player’s ages 12 to 18 and ten winners were chosen based on their passion for the game and views on sportsmanship. Each received a new Yonex VCORE racket to help support their tennis games and dreams.

The program was initiated when Yonex selected the SCTA Foundation as a recipient of its Buy 1, Give 1 campaign, in partnership with Naomi Osaka. Yonex donated one racket for every Limited Edition EZONE sold (up to 1,000) to celebrate the return of tennis and help communities in need. We are grateful for their support and excited to share the stories of the SCTA Foundation/Yonex USA winners. Here are their stories. 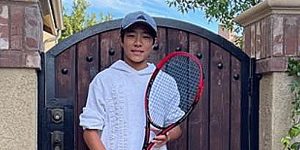 Veorah Feddanich, 14, plays tournaments, participates in Junior Team Tennis and hits with family and friends in the San Fernando Valley. She aspires to one day play professional tennis.

“I know I have a mountain of work ahead of me but I know I will reach my goal because of my determination and integrity,” Feddanich said. “I train in some way every single day since I decided on this path about a year and a half ago. Receiving this racket is helping me.”

Feddanich also has strong views on sportsmanship and offers a positive reflection on competition.   “If everyone could play fair, be respectful to one another, and be grateful for every blessing given to them in life, this world would be a much better place,” she said.

Feddanich had previously tried the Yonex VCORE racket and loved how it provided additional power and spin.

“You can feel a beautiful pop at contact,” she said. “Receiving this racket means so much to me because it’s the best racket I’ve ever held. Also in some way it’s giving back to my parents who already sacrifice so much to support my dream.” 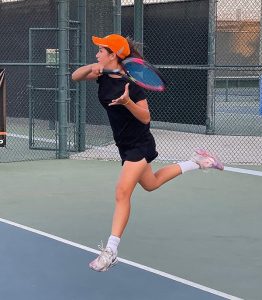 Siblings Olivia and Jacob Jauregui from Indio play in local National Junior Tennis & Learning (NJTL) programs. Both received Yonex VCORE frames as they had long ago outgrown their previous rackets.

“I was getting too big for my racket,” said 11-year-old Olivia, who practices twice a week. “I show good sportsmanship by tapping rackets at the end of a match. It’s a way to say ‘good job’ to my opponent. Also, I don’t get mad if I lose.”

Salight Choi, 18, plays tournaments, high school tennis and at her local park courts in San Pedro. She believes it’s important to have a strong character in addition to a good game.  She tries to play with honor and make her community proud.

“I want to represent my parents and coaches when I’m on the court,” Choi said. “I do not get in my opponent’s faces and I make the best possible calls. Though winning means a lot to me, having a strong character is more important.”

Salight’s father, Joseph, has taught her to compete with focus, determination and respect.

“Off the court I do not belittle my opponents,” Salight said. “I have learned the hard way that people are more complex than they appear, thus, I should let the tennis speak for itself.”

Toby Edelson, 12, loves playing doubles in Junior Team Tennis. She believes it’s important to be fair, courteous and respectful to her coaches, parents and officials.

“Tennis is fun but it can be super complicated,” she said. “Good sportsmanship should not eclipse that. I’m always honest and I let people know when they hit a nice shot. When I play doubles, I am not a ball hog. I share with my teammates too. ”

Additional examples of Edelson’s court etiquette include clearing the balls after a serve and sending them back so the server always starts with two balls. She now enjoys her new VCORE, which replaced her sisters “hand-me-down” frame that she had outgrown. 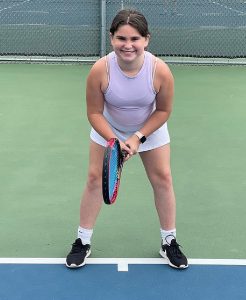 Tyler Perez, 16, used his new Yonex racket while competing for his high school tennis team in Rancho Cucamonga. “I learned winning is not always important,” he said. “It’s how you win and that you respect yourself in the process.”

Taiyo Iwazaki, 15, says playing tennis helps him to feel like he is at his best. He participates in tournaments as well as Junior Team Tennis.

“Being surrounded by my friends and family members (in tennis) comforts and encourages me,” said the San Diegan. “Over time, I realized playing sports is not just an activity with practice and games. It’s more than that.  It includes sportsmanship with fairness, respect and how to treat other competitors. On and off the court I compliment my opponents if they hit an incredible shot because it lets them have a feeling of achievement which makes the game more enjoyable. I also try to be a good role model for those that are younger. Maybe they can follow in my footsteps and show kindness to others. ”

Other winners include Marli Cain of San Diego, Tristan Montecino from Oxnard, Jovan Pedroza of Rossmore and Kaitlyn Nguyen of Irvine. 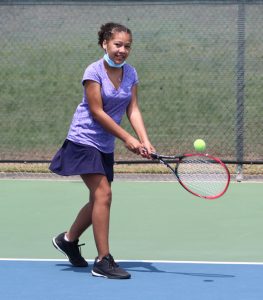 “We hope these rackets help the SCTA Foundation grow the love for the game,” said Michelle Rocky, Yonex Marketing Assistant. “We hope it inspires the next generation of tennis players.”