SCTA Foundation Wheelchair Camp Brought Miles of Smiles to All

They gathered at Dignity Health Sports Park in Carson and the players numbered 16 in total, ranging from youngster under-12, beginners, intermediate and advanced players taking instruction from top-level USPTA certified coaches, and all under the watchful eye of the USTA’s National Manager of Wheelchair Tennis, Jason Allen.

“It’s all about creating opportunities and independence, for all the players,” said Linda Milan, Executive Director of the USTA SoCal Foundation. “The USTA Southern California section has always been so supportive of wheelchair tennis. We’d love to do more of these and are looking to do the next one in San Diego at Barnes Tennis Center.” 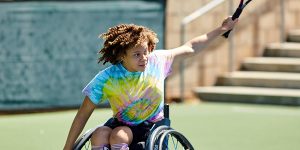 Milan said the Foundation Board of Directors is made up of longtime distinguished members of the Southern California tennis community, names like Board President Bill Kellogg, Bob Kramer, Jim Buck, Eric Davidson and Charlie Pasarell, to name a few.

“It’s people like our Board members and others within our Section who contribute, which allows programs like wheelchair tennis to exist,” Milan said. “I can’t stress how important it is to get donations and grants so that the Foundation can keep growing and helping more players and more often.”

The camp began on a Thursday in mid-May with a coaching certification course and continued over the next three days and concluding on Sunday. Those interviewed during a five-hour Saturday said they were here to learn from the best, with the major goal to keep improving at a game they love to play. 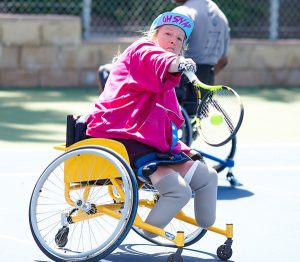 “I’m very impressed with what I’ve seen so far,” said Coach Dee Henry, long considered the matriarch of Southern California wheelchair tennis as she has been the No. 1 cheerleader and instructor of the sport for years. “I’m always inspired to help and serve and it’s great they have added the training and certification component to a camp like this.”

Begay began coaching wheelchair tennis 25 years ago in Albuquerque, N.M. He moved to the Indian Wells Tennis Garden a few years back and recently began working at Woodhaven Country Club in Palm Desert.

“You see the joy on the players faces and how much they enjoy the challenge of playing tennis in a chair,” Begay said. “For a lot of them it’s the best thing that happens to them and it gives them a good feeling.” 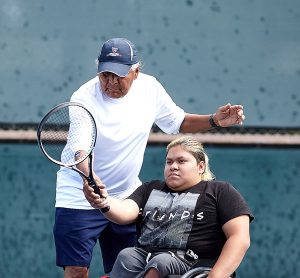 USTA Southern California Director of Adult and Wheelchair Tennis Madeline Segura said that the COVID-19 pandemic slowed play opportunities for many of the players, but that has just made them more eager to return to the courts. “As we were coming back it was hard for us to find courts,” Segura said. “Everyone is so excited to be here. It’s such fertile soil here. This weekend is all about giving the players a chance to get back and develop their game with high-level instructors.”

Count Atif Moon as one of those players who couldn’t wait to get back on the courts. An advanced player who competes in Open tournaments in Southern California, Moon was impressed with the level of coaching during the weekend camp. “I’m here to get more coaching and instruction,” Moon said. “You get to come out and play with others at your skill level and we will leave here better players.” 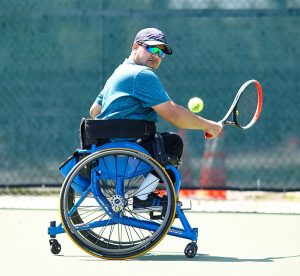 Arelle Middleton from Rancho Cucamonga is just 13-years-old, but hit forehand after forehand on balls fed by Begay and listened intently to all his instruction. “I like wheelchair tennis because it’s an inclusive sport,” said Middleton, who started playing at age 8. “I like that I can play tennis with able-body players, and I can even play on my high school team.”

Added Medora: “I’ve improved a lot in recent years, and I want to keep getting better. I’m working on specific things out here that I hope can make me better.”

Advanced player Mark Jones worked on Henry’s court and hit with Moon and instructor Anthony Lara, who like Henry has been a Southern California wheelchair tennis standout player, coach and advocate for many years. “I’ve been trying to work on a kick serve so I’m working on that,” Jones said during the break for lunch. 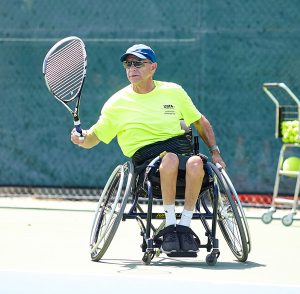 Lara said the camp was crucial in helping “coach our coaches how to teach our wheelchair players because we are such an inclusive sport, not exclusive,” he said. “So, we are here to share our knowledge and our creativity with the other coaches.”

Lara added: “This is the first time on the West Coast that players have been able to take part in an all-comers camp. That is so huge for our Southern California players, and I’m so happy to be a part of it.” 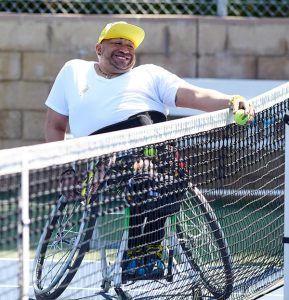 Greg Hasterok was one of the many outstanding and notable coaches on hand during the camp. A United States national team member for the last 10 years, Hasterok has won two golds in the World Team Cup, which is the wheelchair equivalent of Davis Cup. He is a coach for the San Diego State University wheelchair tennis team.

Allen said it is coach’s the caliber of Hasterok that made the camp so strong. “A lot of these coaches have a special place in their heart for it and just want to be of service,” Allen said. “We are still educating people that you can have your wheelchair and adaptive program to play in your mainstream program. There’s no need to have separation. They can play in your junior events, with your adults. You can play high school tennis. Any wheelchair athlete can play in any able body tournament. Only difference is they get two bounces.”

Phil Peabody was the player who made the trip all the way down from Sacramento to take part in the camp. He said he heard about the camp “through the grapevine” and that wheelchair tennis players in California have formed a small, special community. “I love everything about it,” Peabody said. “It was a long drive, but I couldn’t wait to get here, and play with all these amazing players and learn from these coaches. I’m so glad I came.”

To learn more about the Southern California Tennis Association Foundation, go to: https://sctafoundation.org/