Juan Alberto Garcia knows what it takes to be a champion in life and on the tennis court. He is a USPTA Elite pro who not only talks-the-talk but walks-the-walk. Garcia is the Director of Tennis at the San Dieguito Tennis Club in Encinitas and was recently the featured speaker at the USPTA’s San Diego Division Elevate meeting. For his efforts to make a difference and give back to his peers and community, Garcia is the July Pro of the Month for SCTA Foundation. 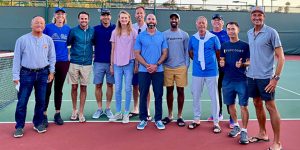 The topic for the recent USPTA Elevate event was how to achieve success in one’s career and as an individual. Garcia shared his professional journey and life story with about a dozen UPSTA pros at La Jolla Beach and Tennis Club.

“This is such an honor,” Garcia said. “I’m here to share my story because I believe every accomplishment starts with the decision to try.”

Garcia, 44, was born in Mexicali, Baja California, and he was a multi-sport athlete. He played soccer, baseball, tennis and basketball at local summer camps. He started competing in tennis at age 10, and was hooked on the sport.  He attended Vincent Memorial Catholic High in Calexico where he logged an impressive, 106-6, high school tennis record. After graduation, he went to CETYS University in Mexico for one year and played baseball because there was no tennis team. Next he transferred to Grossmont College and led the Griffins to their Pacific Coast Conference Championship en route to finishing second in the state. 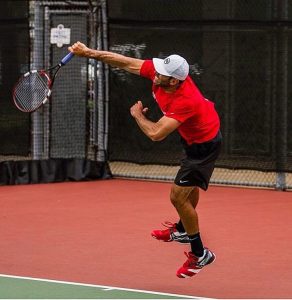 Garcia decided to enlist in the U.S. Army and was assigned to the 82nd Airborne Division at Fort Bragg, North Carolina. His unit specialized in forcible entry parachute assault, securing key objectives and supporting of U.S. national interests.

“There were four groups training at all times and at least one was prepared for deployment at a moment’s notice,” said Garcia. “It was hard work and we had to be disciplined and focused. I learned a lot from that experience.”

After completing his three-year military commitment with an honorable discharge, tennis was still a passion. Garcia received a scholarship to attend Alliant International University and played No. 1 singles and doubles.

“I was more prepared for college after being in the military,” Garcia said.  “The Army opened my eyes and gave me more confidence in my game and my life. I learned to value self-discipline. This was a missing link in my life and I believe it was the key to my later success.”

Garcia graduated from Alliant and earned Bachelor of Science degree in Business. He became a teaching professional and joined the USPTA in 2007 while still enjoying competition at top levels. His post-college competitive highlights include:

“I knew the process of what it takes to get better in tennis so I applied that attitude and determination to learn as much as I could in business,” Garcia said. “I took USPTA specialty courses, management workshops and learned about pro shop operations. I also delved into psychology from a player’s perspective.” 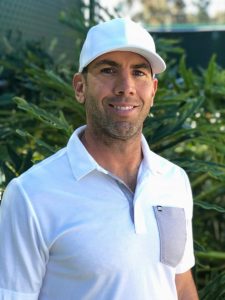 In 2016, he moved into a leadership role as the head pro at Bay Club Carmel Valley working with USPTA pro Tom Shea.

“Juan is the ultimate professional,” Shea said. “He is always prepared for his lessons, interviews or presentations. He uses videos that convey techniques to his student and follows up with his/her progress. For interviews, he researches everything he needs to know about the club or program and presents the information gathered in a nice, neat binder. Overall, he is a proven player and is passionate about learning and growing the game of tennis. We are very fortunate to have him as tennis pro in San Diego.”

In 2018, Garcia became the director of tennis at San Dieguito Tennis Club. The selection process took four months with multiple screenings and interviews. Garcia spent a great deal of time researching the needs of the club and its members. He expanded his proposal beyond junior tennis programming and created an agenda for an engaging and thriving social atmosphere.

“This process opened my eyes on how much I needed to learn to be prepared for the Director of Tennis position,” Garcia said. “My preparation and career goals were aligned with the needs of the club. I’m very grateful for the opportunity.”

Garcia also previously joined forces with USPTA Pro Angel Lopez becoming a part of the San Diego District Tennis Association’s Diversity and Inclusion committee. Their mission was to bring tennis to Hispanic youth in San Diego through financial support, lessons and equipment. Now as the Director of Tennis at San Dieguito Tennis Club, Garcia is spearheading his own D&I effort to bring tennis to underserved groups by bringing equipment and volunteers to Hispanic communities.

“I want to help as many Hispanic kids as possible because I know from personal experience the game of tennis can change lives,” he said. “We’re excited to get this outreach program started once things settle down with COVID.”

This month, Garcia shared his knowledge and leadership journey with peers through the USPTA San Diego Division Elevate group organized by Nathan Weldon and Steve Thom. The goal is to help younger pros develop leadership skills and navigate to higher levels in the tennis industry. The group strives to meet bimonthly with workshops, forums, happy hours and fun activities such as golf and tennis. 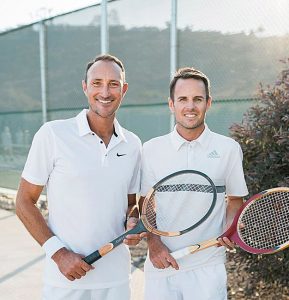 “There is so much value in collaborating with our ideas,” said Weldon and Thom, also co-directors of Fletcher Hills Tennis. “As teaching pros, we all have areas of specialty and it’s important to share our knowledge. That’s how we get better as a teaching community.”

Cassidy Ferrell is a new USPTA teaching pro and she attended the Elevate meeting. The former No. 1 singles player and women’s assistant coach from California State Stanislaus is now a Special Education teacher in the Poway Unified School District. She is also tennis pro on weekends and in her spare time.

“It helps to have mentors,” said Ferrell, who was nationally ranked No. 37 in NCAA Division II women’s tennis in 2020. “I was able network with Juan and the other pros. I learned a lot by asking questions and listening to their answers.”

Garcia’s tennis journey emerged through a step-by-step process over time. Overall, it was fueled by a desire to excel, having self-confidence and being a lifelong learner.

“This was an evolution of putting a lot of pieces together,” he said. “The picture was painting itself through training, competition, getting an education and becoming a teaching professional. Each step revealed a bigger picture but it started with the decision to try.”