There was something for everyone at the San Diego Open ATP 250 this year. It was a historic event that saw the first ever ATP 250 tournament in San Diego. It showcased great tennis by some of the top 50 players in the world as well as up and coming local talent. The Southern California Tennis Association Foundation, which helps under-served individuals, organizations and communities, was proud to be an event sponsor.

The prospect of hosting a major event happened in a flash. The call came to Barnes Tennis Center CEO Ryan Redondo a mere six weeks before the Sept 27 start date asking if he wanted to host an ATP 250 tour event. He was excited to make it happen but the facility was scheduled for the Rancho Santa Fe Women’s Open $60k Pro Tournament around the same time. He made a quick call to, John Chanfreau, the Rancho Santa Fe Tennis Club General Manager, who eagerly accepted the opportunity to host a women’s pro event. Thus, the conflict was resolved and San Diego was blessed to host both a men’s and women’s pro tennis event.

“What we did in six weeks far exceeded what others have done in over a year,” Redondo said. “We quickly put our teams in place to support this huge challenge. Thanks to the tournament staff, Youth Tennis San Diego staff, USTA So Cal and the SCTA Foundation because we came together to make it happen.” 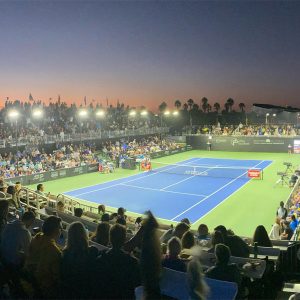 The San Diego Open men’s singles champion was Casper Ruud (NOR), who defeated Cameron Norrie (GBR) 6-0, 6-2 in the final. The San Diego Open men’s doubles title was won by Neal Skupski (GBR) and Joe Salisbury (GBR), who defeated John Peers (AUS ) and Filip Polasek (SVK) 7-6(2), 3-6, 10-5, in a match tiebreak. Along the way however, over 60 matches were played in front of approximately 4,000 people per day. The last three days of the tournament were sold out.

“This was an incredible tennis event and we were thrilled to offer support,” said Linda Milan, the Executive Director of the SCTA Foundation. “There was excitement in the air and kids were able to see great tennis up close. This kind of exposure also brought the So Cal tennis community together. 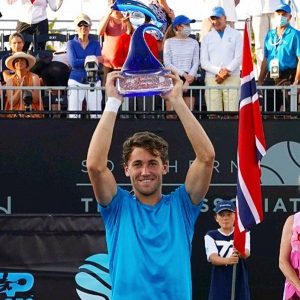 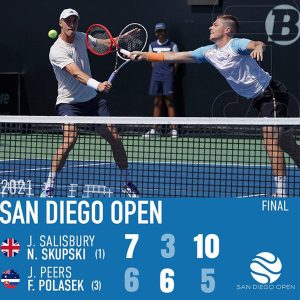 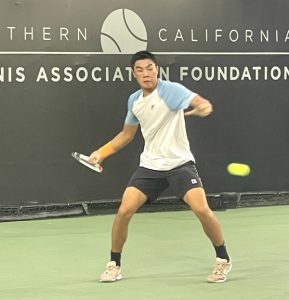 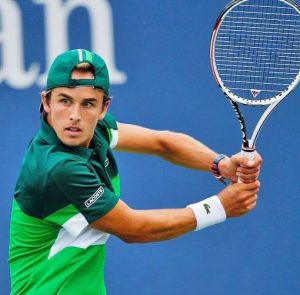 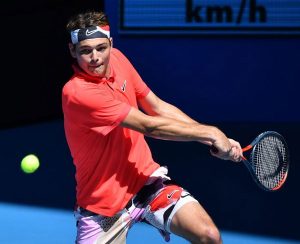 “Taylor loves playing in front of his home town crowd,” said Fritz’s mom, Kathy May. “I think San Diego is a great place to hold a tournament. A lot of the population here loves tennis and I think it was a great turnout. I hope it will continue for many years. It could be the start of a tradition.” 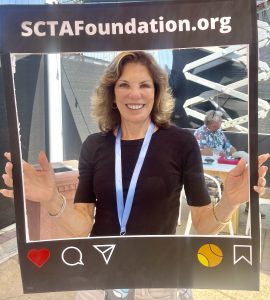 In addition to stellar on court performances, many pros inspired youth behind the scenes. San Diego Open doubles champion Joe Salisbury and American pro Chris Eubanks hit with a 13-year-old Southern California youth, who received the Henry Talbert Summer Tennis Camp Scholarship Grant. (READ HERE for the story.)  Then Casper Ruud made time to hit with Oscar Rouse, 13, who trains with a local ACEing Autism group. Both junior players were thrilled and excited to meet the pros. 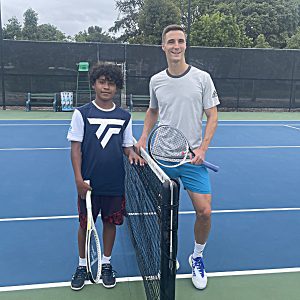 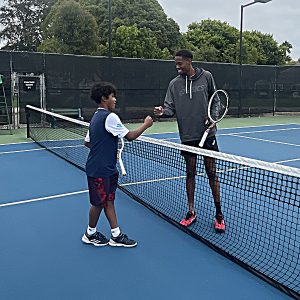 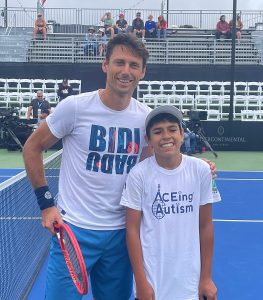 The ball kid crew of over 30 youth from Southern California did an outstanding job under the guidance of Ron Marquez, who is also the Operations and Events Coordinator for the CIF San Diego Section. The ball kids loved the experience on court as well as experiencing great off court moments. 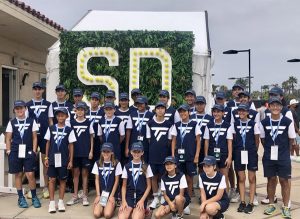 “It was really fun to be a ball kid because you get to see the pros up close” said Andreas Udall of San Diego. “My favorite part was when I got to play a point with a player named August Holmgren. It was something I will never forget.”

The San Diego Open also highlighted community groups. There was a Military Appreciation Day on September 29 to thank veterans and active duty personnel. To showcase the event, Redondo and Nakashima went to the USS Midway to film a video playing tennis on the ship and showing appreciation for US military heroes.  To see the video, CLICK HERE  Additionally, the San Diego Wounded Warrior Tennis Program was honored on center court.

On September 27, UPSTA Pro Angel Lopez from the San Diego Tennis and Racquet Club was recognized for his 42 years of service to the tennis community. There was also a Rady’s Children’s Hospital celebrity doubles match featuring San Diego Loyal soccer coach Landon Donovan and James Blake, the former No. 4 ranked player in the world. They competed against Steve Nash, a two-time NBA MVP, and partner Redondo, the tournament director. Courtside support for the celebrity match included SDSU cheerleaders, who also greeted guests as they entered into the venue. 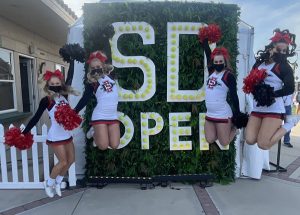 The San Diego Open staff went to great lengths to comply with COVID protocols. All staff, volunteers, players and their families were COVID tested before being issued badges for access to the event. They also did an outstanding job of customer service.

Nancy Abrams, Director of Engagement and Industry Relations for USTA SoCal, was in charge of player credentials and assisted with transportation. Her office on site was the first stop for the players and their posses.

“We were the welcome concierge for the tournament,” Abrams said. “The players got tested and we helped put their credentials together. While they were waiting, we had a chance to get to know them. We also helped with transportation. We were able to congratulate them on their wins and offer kind words if they lost. We just wanted to make them feel better.” 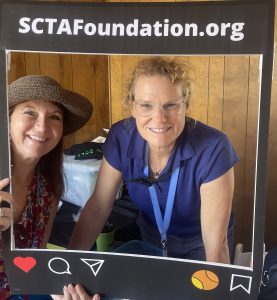 The San Diego Open tennis fans were glowing with praise for many reasons:

Said Jim Boland of San Diego: “I really liked this small boutique setting for a tournament. There were no crowds like at Indian Wells. This is more intimate. It’s awesome.” 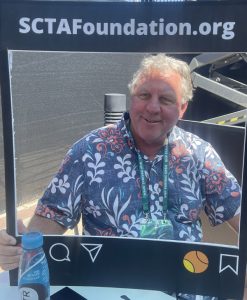 Said Donna Berwanger of La Jolla Beach and Tennis Club: “A long time ago when you went to tournaments like in Forrest Hills (NY) it was smaller and every seat was a great seat. You got a feel for the players. Today that is so rare but it feels like that here. This is a jewel and I hope we can keep it in San Diego.” 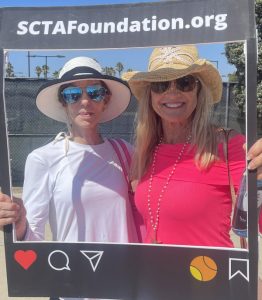 It truly took a tennis village to bring this ATP 250 tournament to fruition. Looking back, Redondo reflected on his personal highlights.

“This exceeded my expectations,” Redondo said. “Even the qualifying matches had standing room only. It was all about teamwork to host an event of this caliber. The thing I will always remember is just being with so many great people at one time.”

The bigger picture, however, might be the impact on kids who want to play higher levels of tennis.

“Tournaments like this enable kids to dream,” said Bob Hochstadter, the President of USTA Southern California. “To want it and do it, you have to see it. The SCTA Foundation supporting this tournament could be a springboard of other events in Southern California. We need this. The kids need this. It’s the greatest thing there is.” 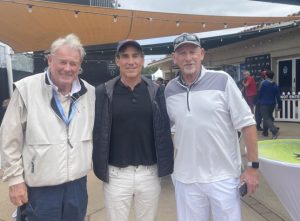 ABOUT THE SOUTHERN CALIFORNIA TENNIS ASSOCIATION FOUNDATION
Our mission of “Changing Lives and Communities through Tennis,” serves as a pathway to offer financial support to individuals and organizations. We are a 501©3 nonprofit organization and the charitable arm of USTA Southern California. We help people of all ages and abilities to improve their health, fitness and quality of life through the sport of tennis. Founded in 1986, the SCTA Foundation has had a community impact of giving more than $500,000 this year through grants, scholarships, program support, equipment and more to recipients throughout Southern California.To learn more about the SCTA Foundation, please visit sctafoundation.org. To donate CLICK HERE