Tennis has been a presidential sport for more than a century. It has been used for entertainment, fundraising, health and pleasure. In 1902, a court was created on the White House lawn thanks to U.S. President Theodore Roosevelt, Jr. He practiced with his posse of staff members that became known as the “Tennis Cabinet.” 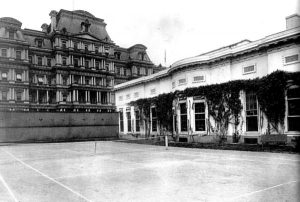 The first tennis court at the White House (Library of Congress).

Then in the 1920’s President Warren G. Harding and his wife, Florence, enjoyed watching great players at the White House court. She was a front runner in promoting women’s sports and hosted the first all-female tennis exhibition at the White House. She was a self-declared feminist of her day, and also supported organizations such as the Campfire Girls and the Girl Scouts. 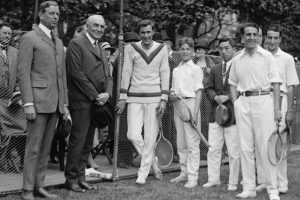 Fast forward 40 years to the Kennedy administration. In 1962, Former First Lady Jackie Kennedy was an avid player and fan of the sport. She took lessons from a Washington D.C. teaching pro named Allie Ritzenberg, who helped her learn the game. Her enthusiasm was contagious and soon she was sharing court time with her husband, President John F. Kennedy. 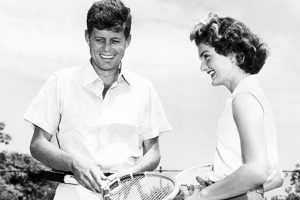 The Reagan years saw First Lady Nancy Reagan host annual tennis fundraisers at the White House to support her “Just Say No” cause, a campaign to end drug and alcohol abuse. When President Ronald Reagan’s term was over, she continued to host local fundraisers and tournaments at the Riviera Tennis Club in Pacific Palisades. 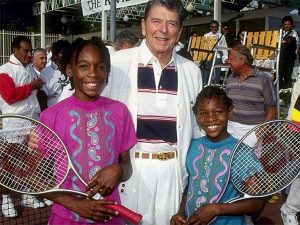 Perhaps one of the biggest tennis fans was President George H.W. Bush (Sr.). When he took office in 1989, one of the first things he did was enlarge the White House court. He grew up with a love of the game thanks to his mother, Dorothy, who was a nationally ranked player. Bush Sr. then taught his son to play tennis. 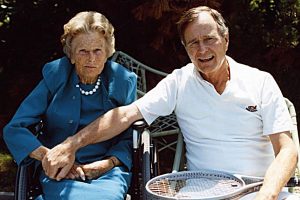 Finally during the Obama administration, President Barack Obama added basketball lines and portable hoops to the court to make it a multi-sport facility. First Lady Michelle Obama embraced tennis in her “Let’s Move” campaign. Michelle Obama helped kick off the Arthur Ashe Kids Day prior to the 2013 U.S. Open. She was a strong supporter of the USTA’s 10-and-Under-Tennis program. Additionally Maila Obama was on her high school varsity team in 2012. 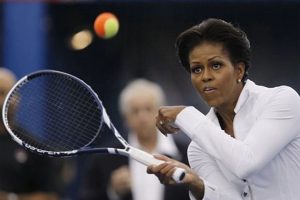 “Tennis is an even better way to get active and have fun,” said Michelle Obama, in a USTA promotional video. “It’s a big part of what we’re doing with Let’s Move…We want to help our kids eat better and exercise more.”

Tennis continues to be a sport for people of all ages and from all walks of life, including U.S, Presidents.  The SCTA Foundation wishes you a wonderful Presidents’ Day weekend. Pick up your racket and enjoy a game with family and friends.