Ms. Adams will visit the USTA Training Center West at Dignity Health Sports Park (18500 South Avalon Boulevard, Carson) on Sunday, April 24 from 12pm to 3pm. She is expected to make a short introduction followed by audience questions, and will sign copies of her book. The first 50 guests to RSVP (via EventBrite) will receive a free copy of “Own the Arena,” which was released by HarperCollins Publishing last year.

“The SCTA Foundation is delighted to bring Katrina Adams to Southern California for this special event,” said Linda Milan, the Executive Director of the SCTA Foundaiton.  “Katrina has demonstrated her leadership in the many roles she has undertaken and is a role model for success.  I want to thank the USTA Southern California (USTA SoCal) and the American Tennis Association (ATA) for their partnership to make this happen.” 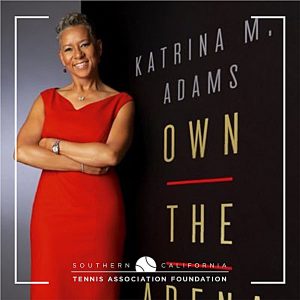 A former doubles specialist with twenty WTA titles who ranked as high as #8 on the tour’s doubles rankings list, Ms. Adams is best known for her tenure as the President and CEO of the United States Tennis Association from 2015-2018. She was the youngest CEO in the organization’s history, the first African-American and first former player to hold the position.

“I don’t really call it a memoir,” Ms. Adams said of her book recently in conversation with USTA SoCal. “I look at it as a leadership book. I want people to understand that no matter where you come from or what you’re doing, you have the capabilities of becoming a strong leader if you believe in yourself and you are willing to take risks. Own your courage, own your voice, own your identity so you can own the possibilities.”

The April 24 event hosted by the SCTA Foundation will also feature interactive tennis activities at the Training Center, as well as an on-court tennis exhibition. The event is free to the public. To register for the event, go to CLICK HERE.

* USTA So Cal contributed to this story.

ABOUT THE SOUTHERN CALIFORNIA TENNIS ASSOCIATION FOUNDATION
Our mission of “Changing Lives and Communities through Tennis,” serves as a pathway to offer financial support to individuals and organizations. We are a 501©3 nonprofit organization and the charitable arm of USTA Southern California. We help people of all ages and abilities to improve their health, fitness and quality of life through the sport of tennis. Founded in 1986, the SCTA Foundation has had a community impact of giving more than $500,000 this year through grants, scholarships, program support, equipment and more to recipients throughout Southern California. To learn more about the SCTA Foundation, please CLICK HERE To donate CLICK HERE