Before embarking on his professional career in earnest on Tuesday at the Rancho Santa Fe Open, the inaugural $15,000 Futures event on the SoCal Pro Circuit, August Holmgren acknowledged one of the most important mental and emotional adjustments he would have to make is learning to cope with the concept of dealing with defeat.

One week into professional life on the ITF World Tennis Tour, that hasn’t happened yet. Eight days removed from concluding his college tennis career with the University of San Diego in the NCAA Division I men’s singles national championship match, the 24-year-old Denmark international won his first ITF pro singles title at Rancho Santa Fe Tennis Club, defeating Irvine resident and No. 2 seed Gage Brymer, 6-4, 6-4. The Southern California Tennis Association Foundation is one of the proud sponsors of this circuit.

Holmgren, suited up for Sunday’s final in his familiar USD polo shirt, rode what he claimed was one of the best serving matches of his life and fittingly stopped Brymer’s nine-match ITF win streak with an ace on his first match point. 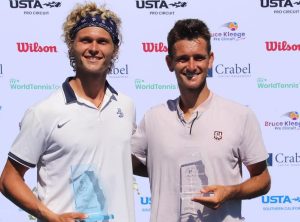 “The first thing I said on Tuesday was I want to win it all,” said Holmgren, who also won the men’s doubles championship on Saturday to complete a Rancho Santa Fe Open double. “I don’t think I expected to win both singles and doubles but every tournament, every match I play, I go in there with the expectation to win because that’s how I play the best. 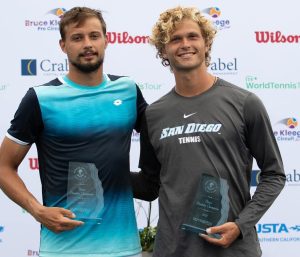 In Sunday’s women’s singles final, Talia Gibson, the No. 2 seed from Perth, Australia, rallied from 5-2 down in the final set and benefitted from a double fault on match point to edge No. 4 seed Maria Kozyreva, 7-6 (4), 3-6, 7-6 (5) and claim her first ITF women’s singles title.

“It feels amazing,” said Gibson, who trains in Brisbane, Australia and turns 18 later in June. “To come back from 5-2 down in the third also is a really great achievement for me. Trying to stay as positive as I could and just do whatever I could to stay in every point and not let anything go by.” 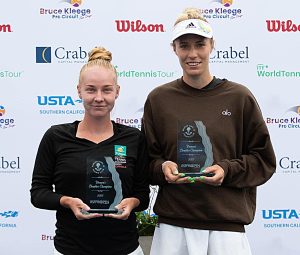 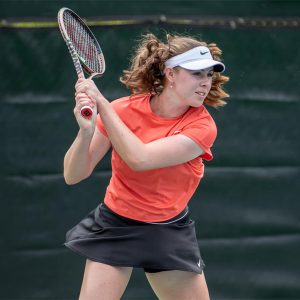 The SoCal Pro Circuit was created by USTA Southern California largely for the benefit of Southern California residents and collegians, providing professional-caliber development and Pro Circuit tournament experience along with valuable ATP and WTA Tour ranking points. This premise manifested itself through the Rancho Santa Fe Open’s men’s singles final.

Brymer, 27, has been a frequent flier on the ITF World Tennis Tour in 2022. Brymer has played 18 tournaments since mid-January, including the past seven weeks in Monastir, Tunisia, where Brymer pulled out his third career ITF Pro Circuit title in his last tournament before this week. 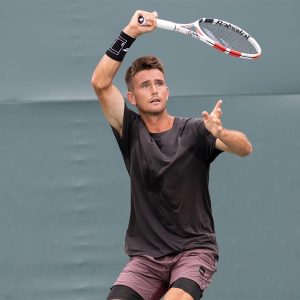 He started the year with five events in Cancun, Mexico, then traveled to the Dominican Republic, Monterrey, Mexico, followed by California stops in Bakersfield and Calabasas, Ecuador, and the seven tournaments in Tunisia. Needless to say, Brymer is extremely grateful for USTA Southern California’s creation of the SoCal Pro Circuit.

Said Brymer: “It’s fantastic to be able to play at home right in my backyard. I’ve been traveling so much and very little of it has been in the States. It’s really nice to be able to drive from home to matches instead of being able to fly 20 hours and then stay in a foreign country. We are super fortunate to have these and hopefully there are more and more events in the future. It would be nice to keep these going, and it would be really nice to get some Challengers in California as well.” 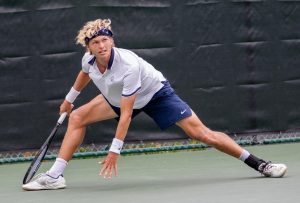 “In Australia, most of the time, the closest tournaments are around Asia and so we thought what better place than San Diego for a tournament in America. Honestly, it’s unbelievable. This area is so pretty. I would honestly just live here, it’s so nice. Definitely would come back again sometime.”

Kozyreva completed her collegiate career at St. Mary’s College (Calif.) last week, advancing to the Round of 16 at the 2022 NCAA Division I Women’s Singles Championships and gaining NCAA Division I All-American status. The 23-year-old Russian will play next week’s SoCal Pro Circuit tournament at the University of San Diego before returning to St. Mary’s to finish her Masters’ degree this year.

As the No. 2 seed in doubles, Holmgren won his second career ITF doubles championship, partnering with Alexander Cozbinov, of Moldova, for a marathon 6-4, 6-7 (3-7), 21-19 (third-set tiebreaker) victory over Australian Mitchell Harper, a Virginia Tech product, and Abraham Asaba, of Ghana.

University of San Diego standout Solymar Colling, an Orange, Calif. native and San Diego resident, fell in her bid for her first ITF doubles crown after she and 18-year-old Spaniard Claudia de las Heras Armenteras lost 6-1, 6-3 to Kozyreva and her Russian teammate, Veronica Miroshnichenko, in the championship match. Kozyreva’s singles defeat was positively offset by winning her second ITF pro doubles title. She won her first ITF doubles crown in Cancun in 2019. 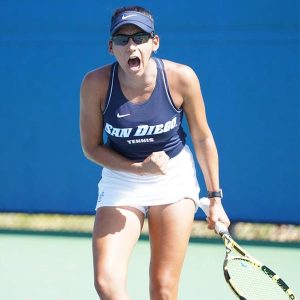 “Overall, just really happy with the week,” Kozyreva said. “If I won both (events), that would’ve been better. It’s my first professional event since the fall, and first since I’m out of college. Now I’m onto my WTA dream. Overall, it was a nice start.”

The SoCal Pro Circuit moves onto the University of San Diego for its second week (June 6-12) before the San Diego swing wraps up June 13-19 at Barnes Tennis Center. Each tournament features men’s and women’s main draws of 32 singles players and 16 doubles teams. Each tournament is open to the public, with free admission.

To learn more about the SoCal Pro Circuit, go to www.ustasocal.com/procircuit;

ABOUT THE SOUTHERN CALIFORNIA TENNIS ASSOCIATION FOUNDATION
Our mission of “Changing Lives and Communities through Tennis,” serves as a pathway to offer financial support to individuals and organizations. We are a 501©3 nonprofit organization and the charitable arm of USTA Southern California. We help people of all ages and abilities to improve their tennis health, tennis fitness and quality of life through the sport of tennis. Founded in 1986, the SCTA Foundation has had a community impact of giving more than $500,000 this year through tennis grants, tennis scholarships, tennis program support, tennis equipment and more to recipients throughout Southern California. To learn more about the SCTA Foundation, please visit sctafoundation.org. To donate CLICK HERE