Before the Atlantic Coast Conference-Freshman of the Year nod at the University of Virginia,before the back-to-back finals in Los Cabos and Atlanta as a 19-year-old, before his summer breakthrough to the Round of 16 at Wimbledon, Brandon Nakashima was just a starry-eyed junior with pro dreams, honing his game in and around his hometown of San Diego, including the courts at Barnes Tennis Center.

On Sunday afternoon, Nakashima returned to that same stomping ground to capture the biggest trophy of his young career, the 21-year-old’s first tour title coming in the form of a 6-4, 6-4 win over fellow Californian Marcos Giron at the San Diego Open ATP 250.

“The SCTA Foundation is so proud of Brandon’s accomplishments,” said Linda Milan, the Executive Director of the Southern California Tennis Association Foundation. “He is a hometown hero and he is proof that dreams do come true with hard work, dedication and determination. He is an inspiration to us all.” 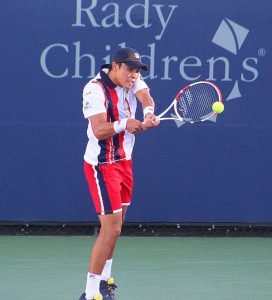 “It’s a super special moment for me to capture my first ATP title here in San Diego, where I grew up,” said the fifth seed, who will achieve a new career-high No. 48 in the Pepperstone ATP Rankings. “There’s no other feeling like it. It’s something that you really never dream of, to do it in my hometown with all my friends and family supporting.”

The former UCLA standout Giron, the 2014 NCAA singles champion, was appearing in his first ATP final. At 29, the Thousand Oaks native was hoping to become the oldest first-time tour title-winner of 2022. But a day after dismissing top seed Daniel Evans of Great Britain in a straight-sets semifinal, the third seed ran into Nakashima, a longtime friend and practice partner. Nakashima would collect six of his eight aces in the dominant 34-minute opening set alone. He saved three of the four break points he faced, all of which came in the second set. 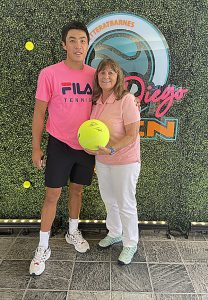 “I wasn’t really trying to go for aces. I was just trying to go for placement,” he said. “For me, power on my serve isn’t too important, but the precision and accuracy are. I think I did that pretty well this week.” 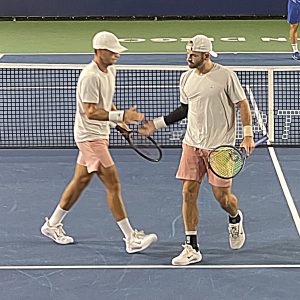 “Nate and I teamed up a little bit last year and kind of rolled into this year,” said Withrow of the pairing, which was making its first appearance in an ATP Tour doubles final. “We’re looking for this to be a steady partnership that can continue to grow and continue to get better. I think we’re kind of on the right path.”

In other pro tennis action, the San Diego Open WTA 500 hosts the top women’s players in the world. It’s an incredible field including Iga Swiatek, Coco Gauff, Jessica Pegula, and Paula Badosa to name a few. The tourney runs October 8 to 16 and tickets are available at seatgeek.com.

About Southern California Tennis Association Foundation – Founded in 1986, the Southern California Tennis Association Foundation is a 501c3 nonprofit organization and is the charitable arm of USTA Southern California.  The Foundation’s mission is to “Change lives and build communities through tennis.” Since 2020, the SCTA Foundation has had a community impact of giving over $600,000 in tennis grants and tennis scholarships to deserving youth, adults, tennis organizations, tennis facilities and tennis programs to make tennis an equal opportunity sport, accessible to all, regardless of age, ability, ethnicity, or economic background. Visit us on Social Media on Instagram, Facebook and Twitter. To learn more about the SCTA Foundation go to: www.sctafoundation.org.  To donate go to: sctafoundation.org/donate/.