Coach Dee Henry has created a legacy of helping people in the world of tennis and beyond. Her mission is to make the sport accessible to players of all ages and (dis)abilities. Henry, a USPTA Elite Pro, was the Women’s Tennis Coach at Biola University for 45 years. This year, she retired and holds the honor of being a Professor Emeritus. Now she has turned her focus onto promoting wheelchair and adaptive tennis in Southern California. This year, the SCTA Foundation has been proud to partner with Coach Dee Henry in many events to make a positive impact on the Adaptive Tennis community.

During the pandemic shutdown, Henry created a nonprofit called the La Mirada Community Tennis Association. She is the president of that organization and her focus is growing youth and adult participation in wheelchair tennis. She has worked with the SCTA Foundation in four events including the Southern California Super Sections Singles and Doubles, USTA Wheelchair All-Comers Camp and the Fast Four and More.

“The SCTA Foundation has been very  supportive,” Henry said. “They’ve provided financial help that makes everything possible. They’ve also assisted with publicity and given us prizes that are always such an addition. Those small gestures set our events apart.” 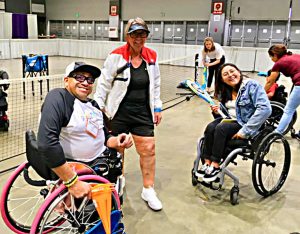 Henry said one of the most critical areas of SCTA Foundation support are providing the use of sports wheelchairs for people who need them but don’t have access to the equipment.

“Without the sports chairs, many people would not have access to tennis,” Henry said. “That gift has changed lives.”

Henry has humble family roots growing up on a farm in Indiana. She was a country girl and there wasn’t a tennis court within miles of her home. She remembers finding an old tennis racket and a ball, and learned the sport hitting against a barn wall. She fondly recalls the gravel ground gave inconsistent ball bounces, which was a fun challenge. For five years she honed her skills against that barn wall and discovered tennis tips from library books.

Her first tennis hero and role model was Althea Gibson, the first African-American player to compete in the U.S. National Championships. Gibson won 11 major singles and doubles titles in the 1950’s and 1960’s. It was during this era Henry fell in love with the sport. 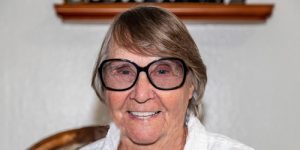 “We didn’t own a television so I went to a friend’s house and I saw Althea play on TV,” said Henry, who was in 6th grade at the time. “It inspired me. I went home and measured out the distance of a court from my barn wall.  I set up targets and tried to hit them. I practiced my serve and taught myself to play. I never had a tennis lesson in my life.”

As a teen, Henry first stepped on a tennis court when visiting her brother who was attending nearby Marion College. (The school was later renamed Wesleyan University.) She graduated from Marion and became the college’s first full time female physical education teacher as well as the first intercollegiate women’s coach for field hockey, volleyball, basketball and tennis.

“They were short seasons so I could coach them all,” Henry said. “Women’s sports did not officially begin until a few years later so it was all unofficial. I had to call other schools to create match schedules to play tennis against Marion.”

Coach Dee met her husband, Jim Henry, and in 1971, the couple moved to Los Angeles. Henry began her tennis legacy in Southern California which includes:

For her efforts, Henry has been recognized with a very long list of regional and national awards including the USTA Brad Parks Award (2018), International Tennis Hall of Fame (2016), USPTA and SCTA Lifetime Achievement Awards (2014, 2005), and USPTA Pro of the Year (2005) to name a few.

For Henry, however, the bigger picture is creating a legacy that will continue to grow. She created the Disability Care Club at Biola, which is a group of college students that are trained to teach wheelchair tennis. Their mission is to develop the next generation of tennis coaches.

“We are developing mentors and leaders and sharing a love of tennis,” Henry said. “We teach college kids how to toss balls and work with wheelchair and Special Olympic athletes. This is all about giving kids an opportunity to do something I didn’t have when I was a child.”

ABOUT THE SOUTHERN CALIFORNIA TENNIS ASSOCIATION FOUNDATION
Our mission of “Changing Lives and Communities through Tennis,” serves as a pathway to offer financial support to individuals and organizations. We are a 501©3 nonprofit organization and the charitable arm of USTA Southern California. We help people of all ages and abilities to improve their health, fitness and quality of life through the sport of tennis. Founded in 1986, the SCTA Foundation has had a community impact of giving more than $500,000 this year through grants, scholarships, program support, equipment and more to recipients throughout Southern California.To learn more about the SCTA Foundation, please visit sctafoundation.org. To donate CLICK HERE.